IN THE BEGINNING, RESPONDING TO A FISHBOWL OF HUMAN INTERACTION: A Review of TETHER

BY BLAIR SCHULMAN. Posted on Art Tattler, May 2010 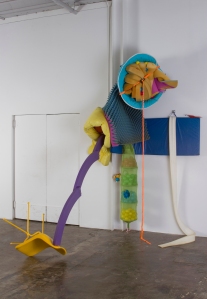 Tether pairs young artists Christina Dostaler and Matt Jacobs. They respond to the architectural singularity of the gallery, addressing human interactions with familiar objects. This menagerie of the everyday is represented in bold, sugary colors.

Taking advantage of their First Friday opening, the recent Kansas City Art Institute graduates were determined to get people’s attention. Jacobs said, “… a zoo or carnival full of fire jugglers and food stands … First Friday rarely seems to be about the artwork itself. We wanted to show something that wasn’t an object to be purchased, something that was ephemeral.

Jacobs’ Careful Boys, 2010, mixed media, is an example of both the artwork and carnival-like environment a First Friday on a balmy evening can bring. A sled, bungee cord, inflatable football and an old Jack Lalanne dumbbell are squeezed together, compressed like a long forgotten stuffed animal. The “tail” (dumbbell) is anchored to the floor. Dostaler’s Spill Out, 2010, mixed media, consists of plastic, electrical tape, drywall tape and construction paper. Originally intended as practical materials, her juxtaposition of color and shape gives it the appearance of a Pee-Wee Herman home improvement project.

Collectively and individually, these objects are steeped in candy-coated iconography. To recognize everything and still see it with new eyes is both fun and refreshing. The exhibition has a familiar referencing. It is both a nod and a wink to artists Jessica Stockholder, Robert Morris and Elizabeth Murray, each with work that addresses spatial elements, size and color with varying results. However, Dostaler and Jacobs lean more toward hommage than derivation. They sensitively curate the space, allowing visitors to see the larger pieces from all angles. Against the high ceilinged, glass-fronted Cocoon Gallery, more or less dead center in the Crossroads Arts District, placement of the work is like being dropped inside a fish tank. Wandering in, around and under this exhibition, visitors inside the gallery are also being observed by those on the street. It’s an effective strategy on both sides of the glass.

While Jacobs tends to work on a arger scale, Dostalers’ pieces are smaller and more finite. Each works off the strength of the other to accommodate the necessary balance. You walk in and around Jacobs’ larger, life-size pieces, then get a bit of breathing room when you look at Dostalers’ work. The two have been keeping tabs on each other’s progress during their four years together at school and now grabbed this opportunity to branch out — each daring the other to push further and further out of their comfort zones.

The back stories of the two artists are still unfolding. It will be interesting to see their work in coming years, once each artist gets a few scars and disappointments under their belts.  They are only just approaching greater sociological questions that their early work suggests.

Matt Jacobs is a found-object sculptor who employs techniques of banding, clamping, and painting to convert everyday items into something new. Often large scale, his works seemingly take on a life of their own, climbing up walls, expanding and squeezing, or spiraling up towards the ceiling. In what seems to be an infiltrative and spontaneous gesture, he sometimes spills high-pigment paint across the completed piece.

Jacobs’ work deals with the aesthetics of overuse and excess. As an artist and inventor, he seeks to disrupt the formalities of “artwork” through the integration of humor. He selects commonplace objects for their familiar and benign nature, though once they are strung-up, bound, stuffed, and candy-coated, it is their very materiality that strikes a mocking tone. The work he presents is familiar and strange, whimsical and reflective, awkward and adroit.

For the past four years, Christina Dostaler has been utilizing and amalgamating fiber, painting, and sculpting techniques. Though initially a painter, working with fibers interested her for the way in which material can be broken down structurally into a linear element. By taking painting not only outside the boundaries of the canvas, but into the intimate realm of weaving, knitting, knotting, and basket weaving, she is able to create a body of work which is simultaneously objects and drawings.

Dostaler delights in the challenge of building a form out of practically nothing. To produce her construction material, she strings monofilament across a wall using several pins and coats it repeatedly with a mixture of acrylic and gel medium. Through this time-consuming process Dostaler is able to imbue her woven works with smooth brilliance. The resulting forms are both surprising and vivacious, pure light and tangible objects.

Matt Jacobs is an artist and writer based in Kansas City, Missouri. He holds a BFA in Sculpture and Art History from the Kansas City Art Institute. His work has been exhibited internationally in Iceland and Italy as well as throughout the U.S. including Texas, California, and New York. In addition to maintaining a studio practice, Jacobs also pursues critical activities such as writing and curating. He has curated several exhibitions in the Kansas City area including “Twenty Something” at City Arts Project and at the H+R Block Artspace’s Biennial Flatfile exhibition. His writing has appeared in Art Tattler, Review Magazine, and Glasstire.
View all posts by Matt Jacobs →
This entry was posted in Writing about Matt. Bookmark the permalink.